Ocean Acoustics: Communicating with Instruments Sitting on the Seafloor

The bottom-mounted research instruments utilized by Processes Driving Exchange at Cape Hatteras (PEACH) scientists sit anywhere from 20 meters to more than 3000 meters beneath the surface of the ocean. These instruments measure the entire water column above using a variety of remote and in situ methods of data collection. With exception to 2 moorings utilizing surface-based meteorological instruments, there is no evidence at the surface that the instruments are there. During the April 2017 deployment mission, the moorings were dropped into the deep ocean and the coordinates of the deployment were logged. A signal was then sent from the ship to confirm that the instruments arrived safely on the seafloor.

Now, 18 months later, we return to collect these instruments off of the ocean bottom, retrieve the data from their internal data loggers, and bring them back to shore for refurbishment. Radio communication is useless to oceanographers attempting to communicate with seafloor-based instruments. Instead we have to rely on acoustic communication. Upon arrival at one of these subsurface mooring stations, scientists will tap into the ship’s acoustic transducers and send a high frequency (12KHz) signal to the ocean bottom. Hopefully, the acoustic transducers below will be able to pick up this signal and wake up the rest of the mooring’s acoustic transceivers for further instruction.

After some communication to ensure that the instrument has been working as planned, a release signal is sent to the mooring sitting on the seafloor. An electric current is then passed through a wire until it burns away, a pin is released, and the instrument is freed from the mooring and floats to the surface. The instrument’s rise to the surface is apparent as the time between pings received by the ship becomes less and less (denoted by the upside-down Y in the attached image. Once on the surface, the floating instrument has a flashing strobe that can be seen for miles around by shipboard personnel. If the floating instrument cannot be found visually, it also has a radio beacon that the ship can hone in to retrieve. The instrument is then captured and brought on deck. 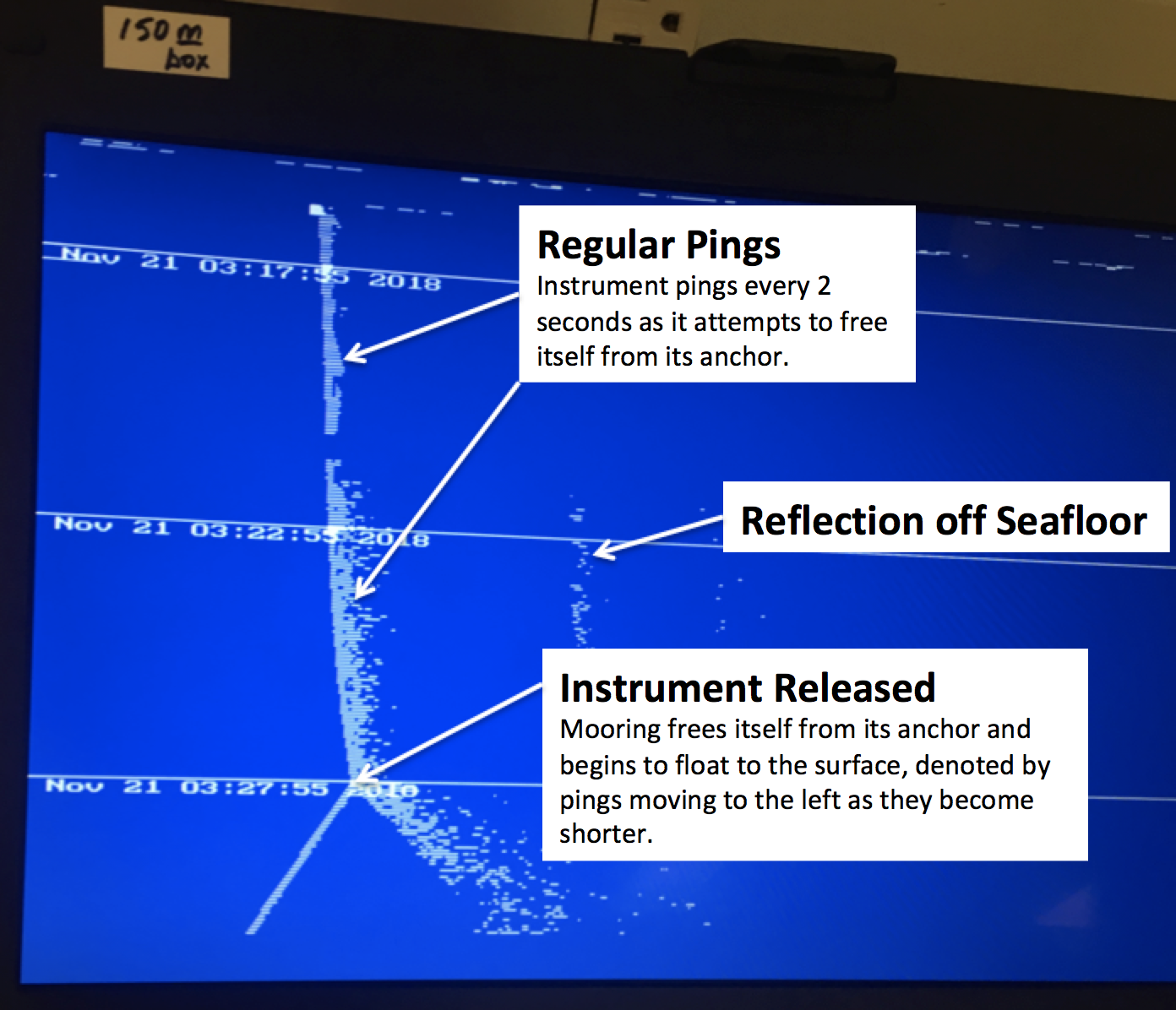